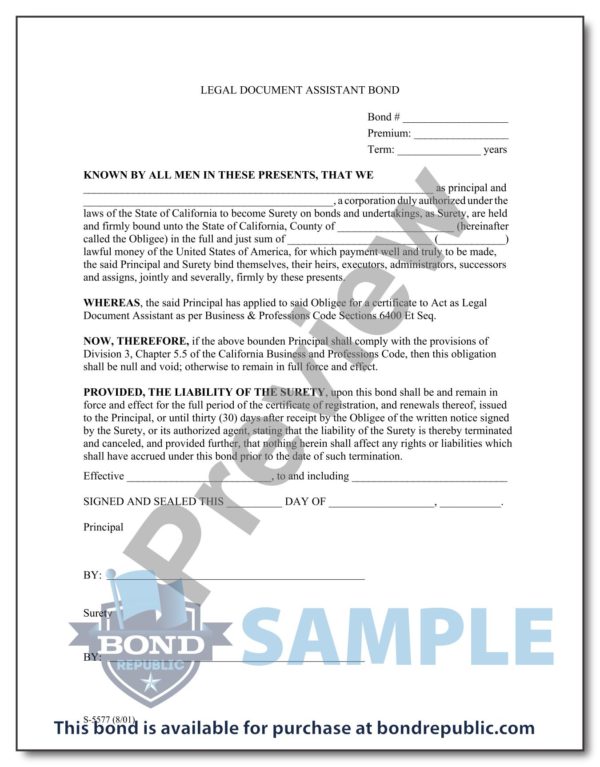 This 2-year $25,000 surety bond is required to act as a California Legal Document Assistant (LDA).

There are no reviews yet.

WHEREAS, the said Principal has applied to said Obligee for a certificate to Act as Legal
Document Assistant as per Business & Professions Code Sections 6400 Et Seq.

NOW, THEREFORE, if the above bounden Principal shall comply with the provisions of
Division 3, Chapter 5.5 of the California Business and Professions Code, then this obligation
shall be null and void; otherwise to remain in full force and effect.

PROVIDED, THE LIABILITY OF THE SURETY, upon this bond shall be and remain in
force and effect for the full period of the certificate of registration, and renewals thereof, issued
to the Principal, or until thirty (30) days after receipt by the Obligee of the written notice signed
by the Surety, or its authorized agent, stating that the liability of the Surety is thereby terminated
and canceled, and provided further, that nothing herein shall affect any rights or liabilities which
shall have accrued under this bond prior to the date of such termination.

I certify under PENALTY OF PERJURY under the laws of the State of California that the foregoing
paragraph is true and correct.

WITNESS my hand and official seal.

You've just added this product to the cart: